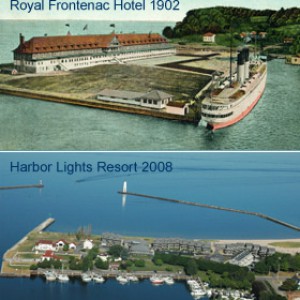 If you’ve visited Frankfort in the summertime, you know it’s a pretty hopping place. But about a hundred years ago, Frankfort was THE place to be. It was home of the elegant Royal Frontenac Hotel which stood on the spot which is now Harbor Lights Resort.The Royal Frontenac was a grand place. In fact, it rivaled Mackinac Island’s Grand Hotel from 1902 until 1912 when the fabulous structure was lost in a fire.

Scroll down to see some key dates in the history of this property, leading you from the Royal Frontenac Hotel to present day Harbor Lights Resort. 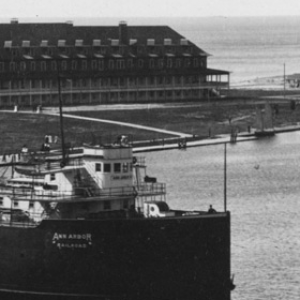 The Royal Frontenac Hotel was built by the Ann Arbor Railroad Company “for the sole purpose of popularizing beautiful Frankfort, and no attraction and accommodation that money, skill and ingenuity could provide would be omitted.” It took more than 2 years to build and opened in July of 1902.The 3-story hotel was a whopping 500 feet long and offered nearly 250 rooms with all the latest amenities of the times, including telephones in every room, a cigar and candy store, a beautiful bar room, a game room and even slot machines, (not exactly legal but permitted in some parts of Michigan at the time).

The Royal Frontenac was a hot destination, with visitors coming on passenger boats from Chicago, St. Louis and Milwaukee and by rail from Toledo, Ann Arbor and Detroit. During July and August, extra Pullman cars were used to accommodate the crowds coming north. It was a bustling resort. Besides the modern rooms, the resort offered amenities including horseback riding lessons, boat excursions and swimming instruction. 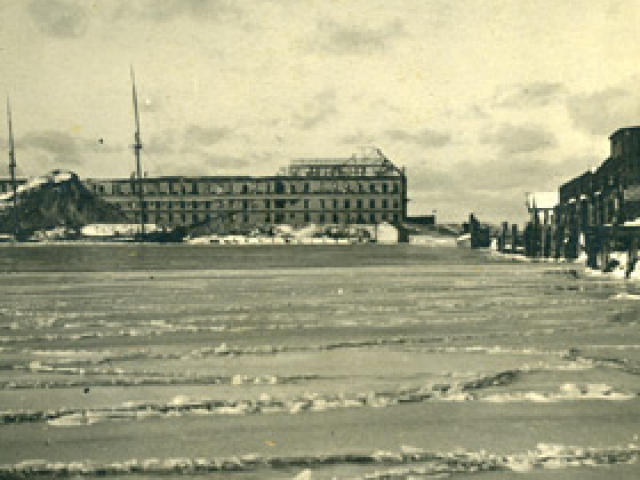 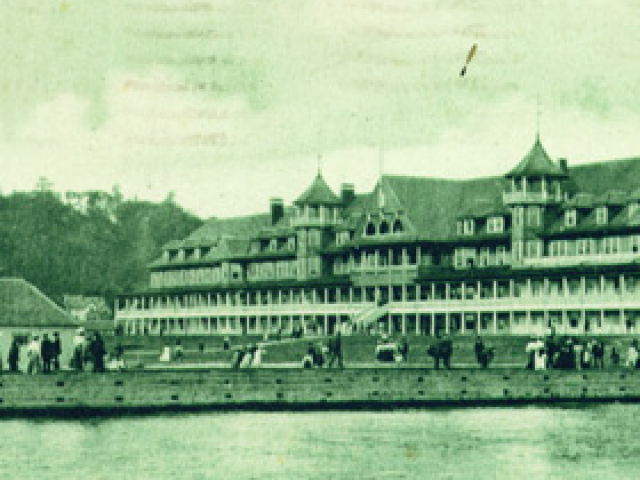 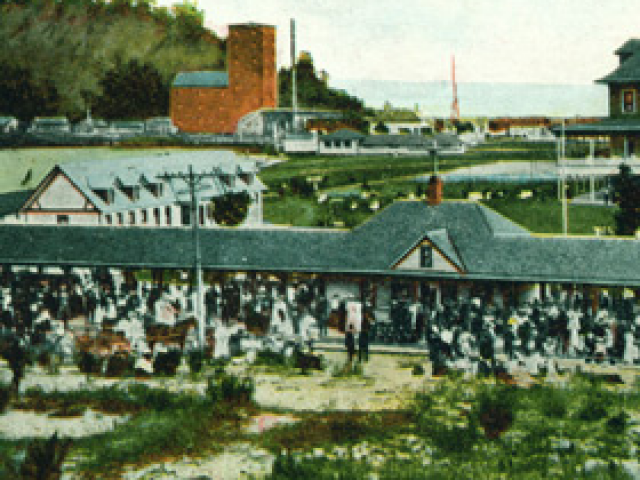 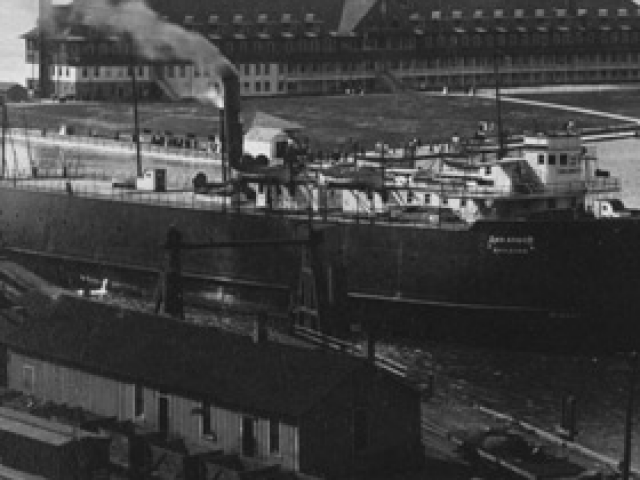 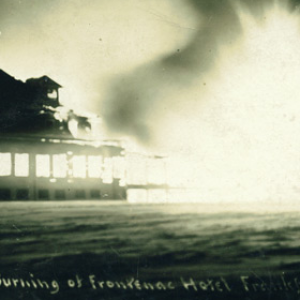 Sadly in 1912, the structure burned to the ground during a mysterious fire. It happened on a cold January night when the hotel was empty and local residents were gathered at a dance at the nearby Eagles hall. They were about to call it an evening when the fire alarm sounded.

There was no saving the Frontenac. The fire was burning furiously before it was discovered and the townspeople many of whom had gotten up from bed to run to the scene realized the hotel was a goner. The fire was unstoppable, but it started at one end of the long structure and had not yet reached the other.

So, the sack of the doomed Royal Frontenac began. Some people reasoned that the furnishings would be destroyed anyway so why not take them? Some reasoned – or so they said later – they removed items from the hotel merely to take them home and protect them for the owners. Whatever the reasoning, the parts of the hotel not yet reached by flames were stripped of beds, bedding, linens, food, utensils, chairs, tables, lamps, rugs, mirrors, pictures and anything else that was portable. It was a sad ending to a grand structure. 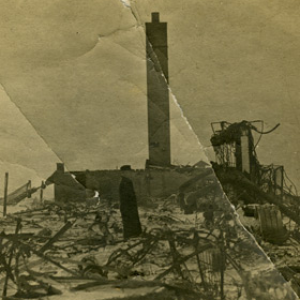 For over a half century, the area where the Frontenac burned to the ground was vacant. The railroad company didn’t rebuild and when approached by the Frankfort City Council on numerous occasions in the late 1940’s regarding the beach property, they declined to sell or rent. In September, 1950, the railroad abandoned train service into Frankfort and two years later, the city was beginning to purchase railroad property on the east end of town.

On July 21, 1952 at a special city council meeting, the city clerk was instructed to contact the superintendent of the Ann Arbor Railroad regarding the purchase or a long-term lease of the property. Again the railroad turned down the city. But ten years later, the Ann Arbor Railroad finally decided to sell the beach area up to George Street to the City of Frankfort for $10,000. The city did not have the monies available. Local businessmen Fred Phipps and Ted Carland among others paid the Chamber of Commerce $10,000, and then an additional amount as the chamber pressured the council into rezoning the property with a specific use in mind. The chamber stipulated that “the property be used for commercial purposes, specifically for a bowling alley, dining facilities and cocktail lounge within a building or buildings to be constructed on the described property, provided that the actual construction shall commence not later than fourteen months from this date (December 7, 1964) and be completed no later than January 1, 1967.” 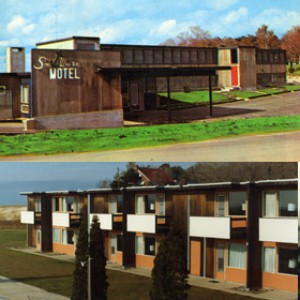 Phipps purchased the liquor license from the 7-Spot Inc. in downtown Frankfort, a local and very popular bar and restaurant. The new Bowling Alley and restaurant would be called the Frontenac, named of course, after the Royal Frontenac Hotel. The motel was called the Sou’ Wester Motel. Phipps owned the Frontenac and Sou’ Wester Motel until the mid-seventies when it was sold. The operation never really made any money and after the sale it once again could not survive and was taken back by Phipps. It was vacant from approximately 1979 until 1982 when Dennis Campbell (nephew of Phipps) put together a partnership of professional business people from Battle Creek, Michigan, and purchased both the Frontenac and Sou’ Wester Motel. 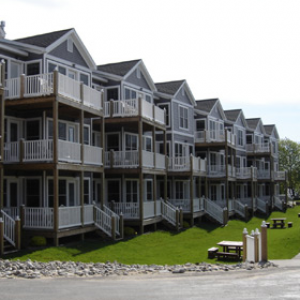 Dennis Campbell and family moved from Battle Creek to renovate and reopen the restaurant and bowling alley. New bowling equipment was purchased and in September, 1982, the entire bowling alley, cocktail lounge and restaurant reopened. Both were popular for the next six summers, but it was tough to turn a profit with only two months of strong business and another ten months of expenses. Campbell tried many things to improve profitability. The restaurant had live entertainment on the outdoor dining deck. In the evenings, the bowling alley lanes were covered and converted into a stage and dance floor and offered live bands and even stand-up comedy. But as hard as everyone tried, the decision to close the restaurant and bowling alley was made in 1988. Two years prior, in 1986, the first set of condominiums and motel rooms were built on the north end of the property, across from the public beach.

Closing the restaurant and bowling alley allowed the structure to be converted into additional motel rooms and condominiums. Once the conversion was complete in 1989, the business name was changed to “Harbor Lights Motel and Condominiums” and the Sou’Wester name was dropped. In 1995, another phase of condominiums were developed along the beachfront. Finally, in 2004, the old “Sou Wester” motel building was replaced with a new and modern building featuring luxury suites and condominiums. When this was complete, the property name underwent it’s final change to Harbor Lights Resort. 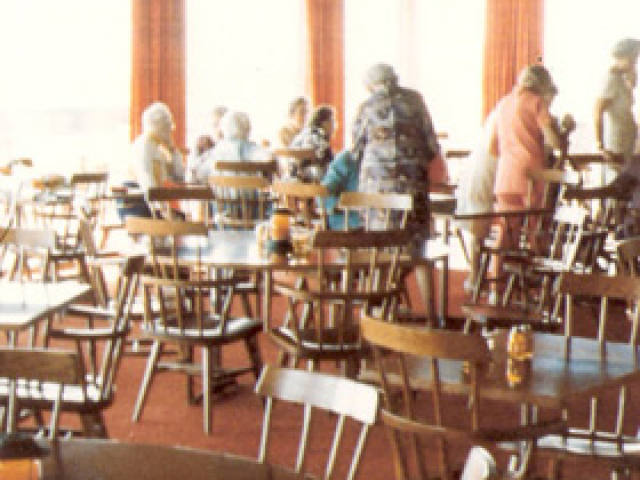 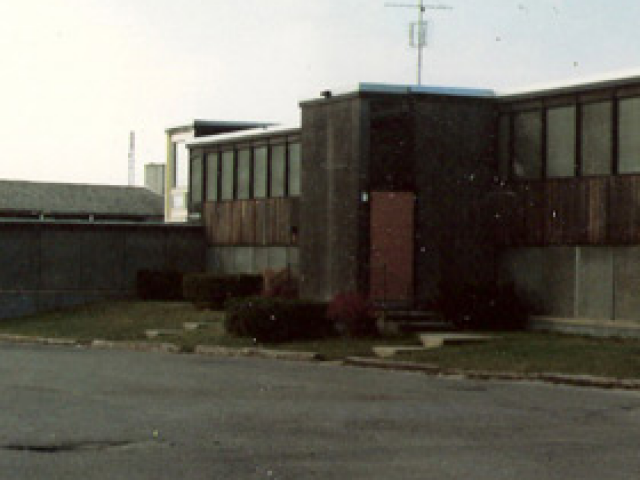 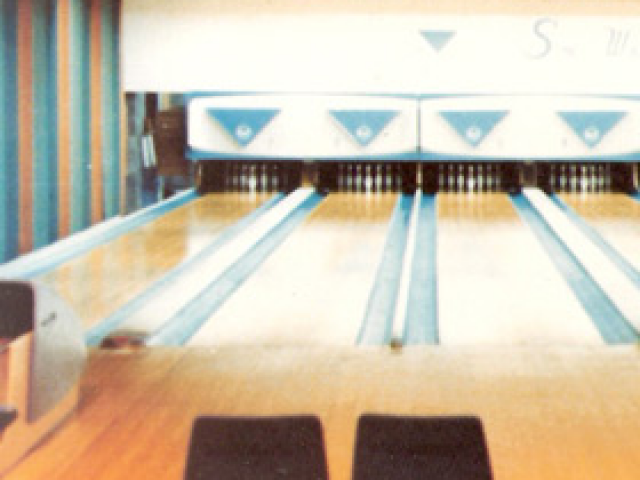 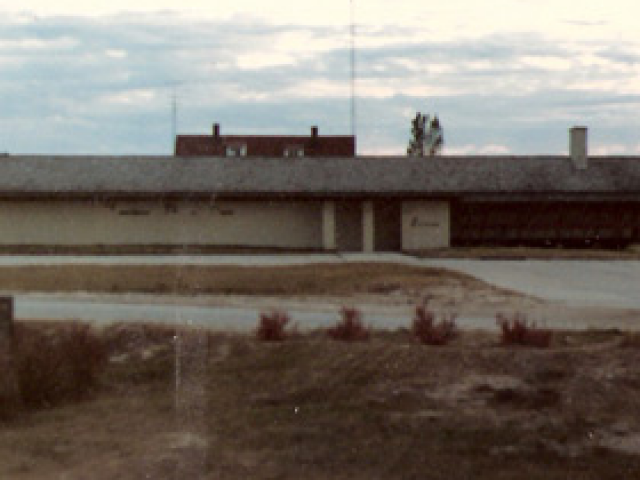 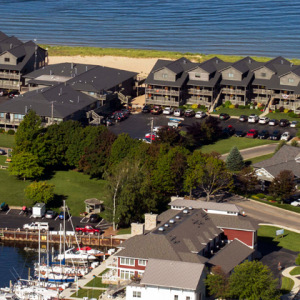 In 2005, Dennis Campbell decided to retire. His son Steve and daughter Amy became partners and purchased the business from him. Their mission is to continually improve and update the property. They really want customers to have a great experience and come back year after year to enjoy what those in the early 1900’s did…one of the most beautiful spots in Michigan or in the country for that matter.

In 2012, Harbor Lights Resort acquired the marina directly across the street, (formerly known as Mitchell Marina and later Gold Coast Marina), and renamed it “The Marina at Harbor Lights”. The marina consists of boat slips for purchase and for rental, as well as luxury condominiums. It is a wonderful compliment to Harbor Lights Resort.

The property has certainly changed over time, but the original intent of the Royal Frontenac lives on at Harbor Lights Resort by allowing thousands of people to discover and enjoy beautiful Frankfort every year.